If you’re ever helped, managed or played amateur sports at Junior or Adult level, you’re bound to know that financing the team is always a key issue. Whether it be collecting subs, buying equipment or even buying a kit, it can be expensive and difficult to afford.

If you’re unfamiliar with the concept, maybe you have seen the name of local business across a clubs shirt for all to see. From the top clubs in the world Barcelona (Rakuten), Man City (Etihad Airways)……Plymouth (Ginsters) to you local Sunday league team every team will try to get a sponsor.

Benefits to the Sponsor

But what does a sponsor get out of this? For the top clubs, they will have worldwide publicity. Their name in thousands of pictures across the season and every fan, proudly displaying that businesses name for everyone to see. However for amateur teams sadly this is not so glamorous. In recently years amateur clubs have been finding it more and more difficult to get sponsorship, due to lack of publicity and rising kit costs.

Over the last year or so, we have certainly noticed a change in this, with local clubs using social media to help promote their sponsors and it has become very successful, With the focus of the public’s attention drawn to phones and tablets, it has helped increase the value to a business sponsoring a local club.

Giving Back to the Sponsors

We have also noticed the vast upturn in the club’s framing an extra shirt as a thank you to their sponsor. This gives the business a visual presence and allows them to show off their generosity and keenness to help local causes as well as help bind a relationship between club and business for future seasons.

One club we have recently provided this service for was Kingsway Rovers. Kingsway was Established in 2015 by a group of friends who wanted to set up a friendly club after being frustrated by other local sides. Their aim, when established, was to promote playing with a smile and has led the club to back to back promotions. Now with two teams Playing in Stroud League 2 and 4. The Club is going from strength to strength.

We Spoke to player Igor Correia Gouveia and this is what he had to say “We decided to get the shirt framed for Sowl Fuud as we wanted them to be able to have a visible token of our appreciation of their support. It’s also something that is noticeable within the restaurant and gives the club a bit more attention, locally. We really want to support healthy eating, active sport and, mainly, Kingsway Rovers! The shirt helps to tie Kingsway Rovers to Sowl Fuud and we’re really excited to see where the sponsorship goes! P.s if you want to try the best vegan food in Gloucester, Sowl Fuud is a MUST!” 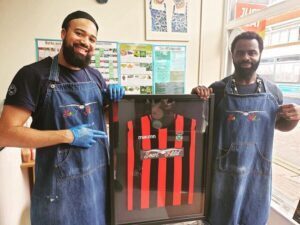 For More info on SowlFuud please visit their page below, Alternatively click here to view our affordable framing packages.